We are so excited and happy to be here!

Before the official start to the lesson we thought it would be a good idea to introduce ourselves to the students. We did this by talking about a piece of art that we made and then an artwork by an artist that we liked. While discussing the artwork we introduced certain elements that would be included in the lesson about storybuilding. Our artwork was displayed on a table, so that the children could look at it and touch it. 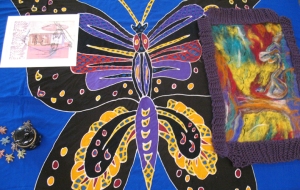 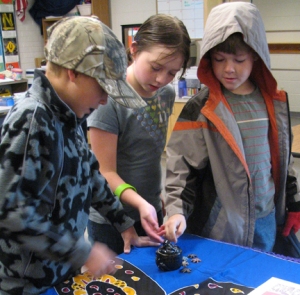 Ana about to read the "Wise Owl"

After the children had gone back to their seats Ana explained what her lesson was to be about. The art of Storybuilding and what makes a good story. Since she was reading a Native American myth called Wise Owl she asked the children if they knew what a myth was. Only a few raised their hands. After a small discussion it was determined that a myth is a story that describes something in nature that talks about its origin or beginning. The students felt it was a fictional story.  This myth explains the meaning behind the phrase “wise as an owl”. In it there are 3 characters: Everything-Maker (to be read by Ana), rabbit and owl. Ana asked for student volunteers to read the parts of owl and rabbit.

Jalen reading the part of Owl

Rune reading the part of Rabbit

After the story was read Ana asked the students to list characteristics of each character. The kids named physical attributes as well as personality traits. Good listening by all! To get the children to understand what goes into developing a character she asked them to create one either from the story or one of their own choosing. They were given the choice of drawing one using markers or pencil or to make one out of clay! Almost all of the students chose CLAY! 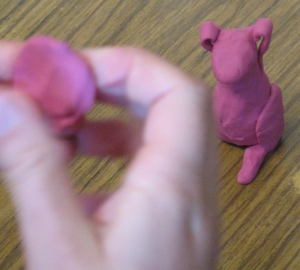 It was fun to watch the students' creatures begin to take shape. 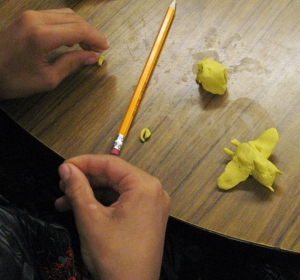 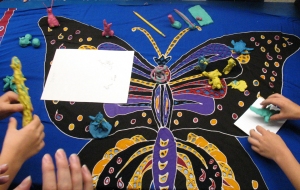 After the students were finished they displayed their clay creatures and drawings on the table. They were then asked who wants to tell a short story about their creature.

Apparently, everyone did! Ana had a really tough time choosing.

Talia sharing the story of her creature. (Sam A. seems very interested!) 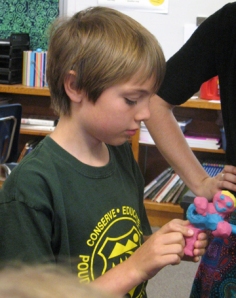 Kai showing his creation to the class.

Please Note: Due to space constraints we were unable to post pictures of all the students creatures creations. However, the students can have the photos taken of their work.

The kid’s enthusiasm and energy was wonderful!
We are looking forward to our next class!
Ana, Naomi, & Alice