During our class circle meeting we told the students that our teacher had us create our own masks. He felt that this would enable us to better understand how to help the students make their own masks. Ana was the first to show and talk about her mask. She described it as being a combination of 3 animals. She then asked the students if they could describe what type of personality it was judging by its characteristics.

Rex really scrutinized the mask and came up with some really good observations. He commented on the orientation of the beak and eyes and said that it animal made the animal look sly. Mira addid that it also might by stealthy!

Naomi was the next to discuss her mask. One of the students commented that it must see well because its eyes were so big. Another student thought it was greedy because its mouth was open wide.

Alice was the last to discuss her mask. She decided not to describe her mask first. She wanted to let the children try and figure it out just by looking at it. One student commented that it might thoughtful because of the sun lighting up its forehead. Another student said that the blue on its chin reminded her of waves, so maybe it liked  the ocean.

We thought that all the students comments articulated keen visual observations and thoughtfulness. This ability will help them to create masks of unique and interesting character. However before proceedingwith the masks we felt that the class needed a refresher lesson in slipping and scoring-a clay attachment technique.

Peggy, a student who has worked with clay before, volunteered to do the demonstration

We provided the students with various tools, so that they could use different textures on their clay masks. 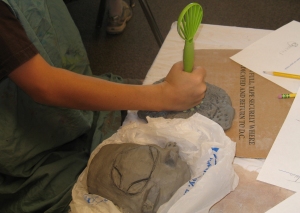 Here a student is testing out the texture an avocado masher makes on a piece of scrap clay. What a great idea! This will allow him to decide whether or not he should apply this texture to his mask.

A student is using a lemon juicer to make "hair". She has already applied some to her mask.

By pushing clay through a small strainer this student created "fuzzy hair". It looks as though she has not decided to to use it on her mask.

We also provided image references. The students were able to refer to these and obtain inspiration.

This student is emphasizng the eye of his liger mask by surrounding it in different colored clay. He also chose to emphasize the mouth in the same manner.

This student is working on his mask with both hands! His right hand is poking a hole in the clay for the eye. While his left hand is creating a texture by scraping away lines. Good demonstration of the subtractive technique-which Naomi showed the students at the start of class. 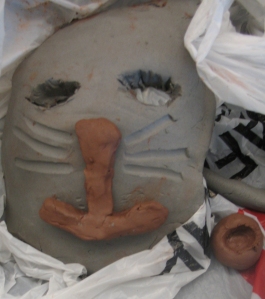 In this almost completed mask another student also chose to make the mouth out of a different color. This really helps to accentuate the expression of happiness and contentment. 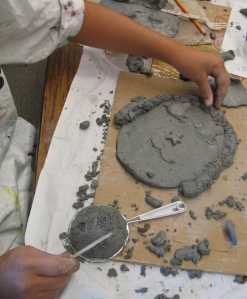 This student chose to incorporate both animal and landscape elements into her mask. Notice the sea turtles for the eyes and the starfish nose.

In the next lesson the students will be enhancing their masks with paint! From what we have observed so far the character masks should continue to develop in interesting and unique ways.